In exactly one month, on April 24 in Ontario, California, Tomasz Adamek (40-1, 27 KOs) will have his most important fight as a heavyweight against Cristobal Arreola (28-1, 25 KOs).

After three weeks of training in Ronnie Shields’ gym in Houston, Shields, Adamek and number one sparring partner Dominick Guinn (32-6, 21 KOs) are talking about “Goral’s” chances and his fight preparation.

One month to possibly the biggest fight of your life…
I’m getting ready for April 24. Every day I see more progress, subtle, but important changes in my fighting style. Watching videos of me sparring with Dominick, I can see more head movement, I’m quicker on my feet and no energy is being wasted. I will need every ounce of it.

Every boxer’s nightmare is training injuries. Not yours?
I was blessed by not being injured for the last 20 years, my whole career. Houston also works for me. There was some blood in the ring during today’s sparring, but it was because I slipped and almost fell from the ring, but it ended only with scratches. This is a part of boxing, if you’re not ready to fight through it, you should change professions.

Are you already in fight shape?
We are on schedule; I need to be in top shape in four weeks. I never had a problem with my conditioning, and with all the exercises Ronnie and his man Brian are preparing for me, every day I will be better. I’m doing three rounds of shadowboxing, then six rounds of pads and now I have a punch output that’s three times more than even my busiest fight. Fighting with Chris will be the easy part after this.

Did you find any Poles in the heart of Texas?
Of course, we are everywhere. I was attending a Sunday Mass, and some small boy started talking quietly to his father in Polish, “Dad, this is Adamek!” And the guy asked me, “Are you who I think you are?” Three days later, I think every Pole in Houston knew I was here. 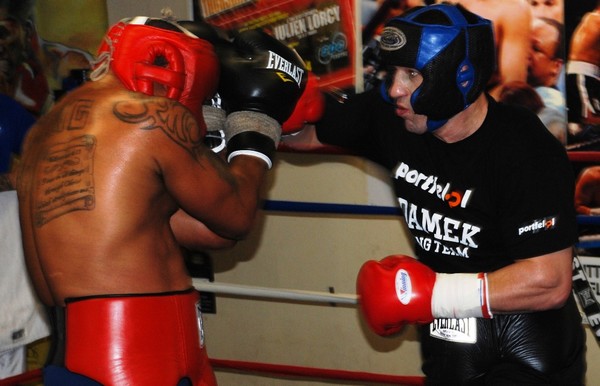 We all know what Chris Arreola will want to do: make the ring smaller (we have 20×20 ring size in the contract), put Tomek in the corner and then put him down. But it will never happen. I’m sure Arreola has a plan B.

What about when he will not see Tomek in front of him, what then?
We are working on angles. It will be an inches games when Tomek will be able to hit him, and Arreola doesn’t have a chance to hit him back.

A dangerous game?
This is a game of high stakes; this is how it should be. We are not counting on one punch, although, just judging by how Tomek is snapping his jabs, and finishing with a right, I’m thinking more and more about making this a more aggressive fight, especially in the last 4-5 rounds.

We spoke when you just started with the former light heavy and cruiserweight champion; you said that there will be no brawling with Arreola. Did you change your mind?
No, I’m telling Tomek all the time, every day that I don’t want him to play a “I’m the man” game with Arreola. Not for first eight rounds, anyway. Then he will have a free hand, can do whatever he wants. But there will be no running at all – just changing position and fire every time Chris would like to come closer.

Are you asking Dominick Guinn, Adamek’s sparring partner, to imitate Arreola?
No, that would make no sense, Dominick is faster than Arreola. I’m just asking him to apply a constant pressure on Tomek. This is what we’re expecting from Chris. This is what we’re counting on. 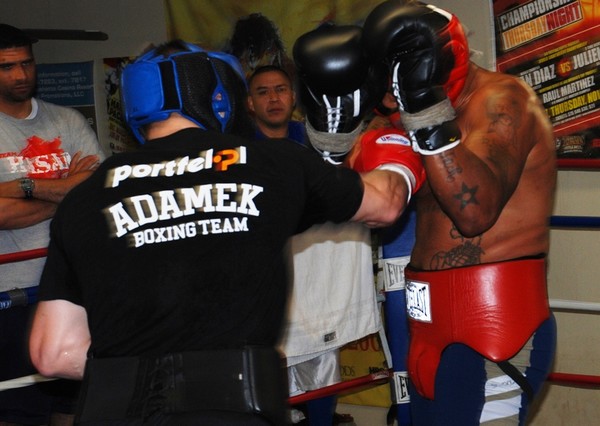 Some people still don’t believe Adamek belongs in the heavyweight division. What do you think?
They aren’t in the ring with him; I have been for the last couple of weeks and he definitely belongs. He’s a top 10 fighter, no doubt. Very quick on his feet and dangerous with his hands. Adamek is very explosive. He can move from defense to offense in an instant.

What about his power and Arreola’s power? Will he change when he gets hit by Chris?
You can feel Adamek’s punches. Really feel. I don’t think Arreola will be able to hit him cleanly, I seriously doubt it. Adamek doesn’t give too many chances to get him and even when you think you’ve got him, he will move and make it impossible.

When Eddie Chambers fought Wladimir Klitschko you said that he felt the power of the big Ukrainian’s and went into survival mode, not a fight mode. Could it be the same with Adamek?
That wont happen; he’s a very different person than Eddie. I know Eddie well; it was kind of expected against Klitschko. After the second round all he needed was a towel and the blanket. Adamek will not let Arreola forget he’s there to win. He will be there, trying to hit Chris from every angle. And he will win this fight. 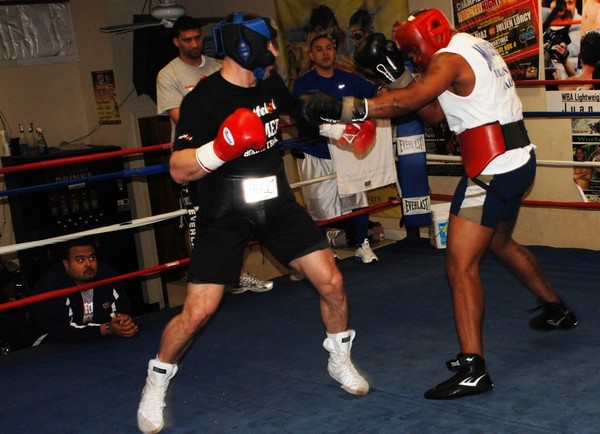